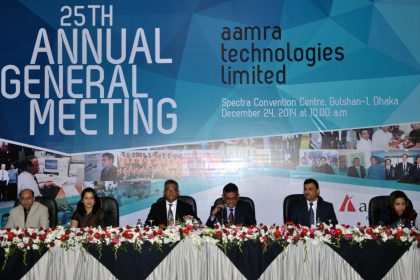 Gulshan, Dhaka – aamra technologies limited (ATL) has declared 10% cash dividend for its shareholders for the fiscal year 2014. This dividend approval was announced at the 25th Annual General Meeting of the Company held on Wednesday, December 24, 2014 at a local Convention Centre in Dhaka. A large number of shareholders attended the meeting which was presided over by the Chairman, Syed Faruque Ahmed.
Syed Farhad Ahmed, Managing Director of the Company, in his welcome address, highlighted the company’s operational performance in fiscal year 2014, the positives of the year that will be carried forward to the next year that outlines the plans and programs that the company has set forth for boosting its operational efficiency and profitability in 2015.
Both the Managing Director and Chairman of aamra technologies limited appreciated their shareholders and stakeholders for their continuous support and cooperation as the company grows ever so stronger year after year. They thanked the shareholders for their constructive suggestions for ATL’s earnings, capacity and goodwill.
Among others who were present were company directors Fahmida Ahmed, Syeda Munia Ahmed, group chief financial officer Zahrul Syed Bakht and company secretary Md. Anamul Haque.
Syed Faruque Ahmed further reassured all attendees that the company has kept up with its credo of excellence by providing its clients with the best possible services. Concluding the ceremony, he thanked the shareholders for their continuous trust and confidence in the company. 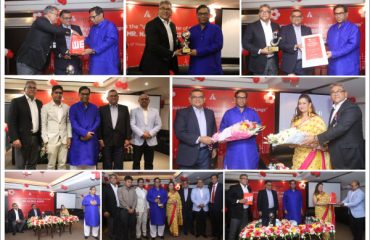 aamra is the Internet Partner for International Poultry Show & Seminar 2019